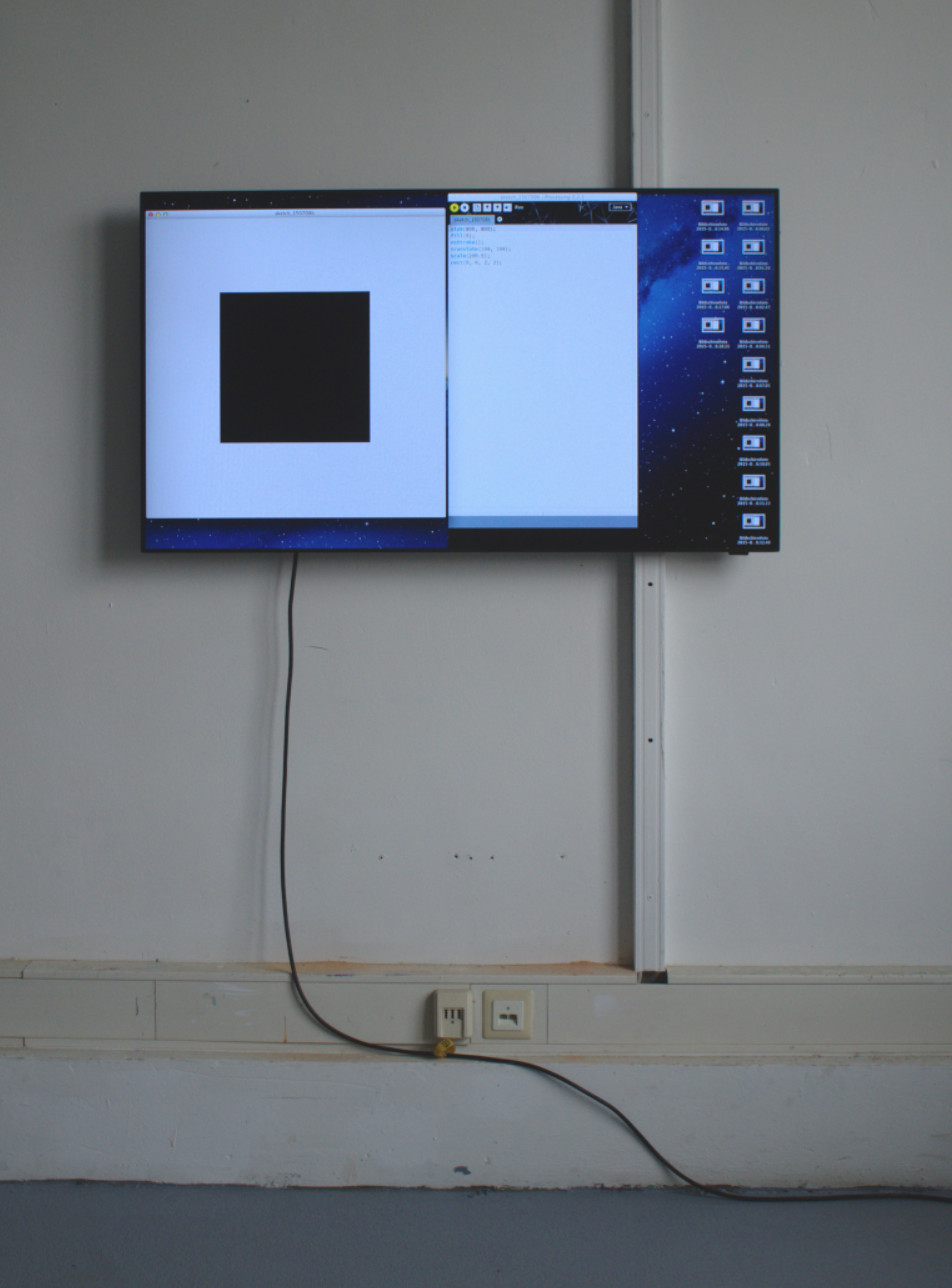 The video shows a sequence of screen-shots. These present different algorithms in the programming language processing to create an identical image: a black square on a neutral gray how it’s used in computer programs. The first algorithm consists of three lines of code and shows the easiest and most common way to do this. Furthermore several more complex, strange or abstruse algorithms, different programming techniques, built-in functions, points, lines, shapes are used to end up in the same image.
This work questions the significance of code in relation to its output, to the perceivable phenomenon. How to grasp their correlation? Which is the relevance of the manufacturing method when it is not shown in the product? What is the importance of the non-visible? Does the area of tension between visible algorithm as a program and non-visible algorithm inside the produced black square change the subjective view?

The video is available for streaming or downloading here: http://mattiskuhn.com/#sketch_150709b

(For some unknown reason the video playback does not work with VLC player, but with other software like ‘Videos’ it does.)

Born 1987 in Marburg, Germany, works in Frankfurt am Main and Cologne, Germany.

The conceptual works focus on the coexistence of humans and technology in a shared environment. Of particular interest is the relationship between theoretical algorithm and physical materiality.

We use cookies on our website to give you the most relevant experience by remembering your preferences and repeat visits. By clicking “Accept All”, you consent to the use of ALL the cookies. However, you may visit "Cookie Settings" to provide a controlled consent.
Cookie SettingsAccept All
Manage consent

This website uses cookies to improve your experience while you navigate through the website. Out of these, the cookies that are categorized as necessary are stored on your browser as they are essential for the working of basic functionalities of the website. We also use third-party cookies that help us analyze and understand how you use this website. These cookies will be stored in your browser only with your consent. You also have the option to opt-out of these cookies. But opting out of some of these cookies may affect your browsing experience.
Necessary Always Enabled
Necessary cookies are absolutely essential for the website to function properly. This category only includes cookies that ensures basic functionalities and security features of the website. These cookies do not store any personal information.
Non-necessary
Any cookies that may not be particularly necessary for the website to function and is used specifically to collect user personal data via analytics, ads, other embedded contents are termed as non-necessary cookies. It is mandatory to procure user consent prior to running these cookies on your website.
SAVE & ACCEPT